Yesterday’s issue of ChemWatch dedicated an Fresh debate over rodent tests for lung cancer with PSLTs-. Based on a commentary by Danish research Group (Ulla Vogel et al), and the reply by Driscolletal_2020 in Partcile & Fibre Toxicology it became clear that the issue still raises a series of questions. Whereas the academic group wants more research, Nanoconsult’s director Paul Borm indicated that more testing is not the key, but Europe’s hazard driven classification is clearly becoming an issue. In addition he pointed out that a better understanding of inflammation as a beneficial versus adverse response in human is clearly a topic for more research that can help to re-consider current rodent driven classification. For those who are new to this topic: in 1988 Paul Morrow published a seminal paper on the overload hypothesis, demonstrating that a large series of low toxicity particles produces lung tumors in the rat upon prolonged, high exposure. He postulated that at some level of volumetric load the lung defence systems are overwhelmed and chronic effects including fibrosis and tumors can occur in the rat. This hazard is now the cause of classification of TiO2 by ECHA as a suspected human carcinogen,causing a ban by many European countries in its use in cosmetics, food and other applications. 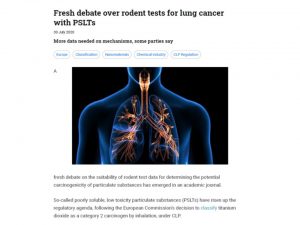 About the Author: Paul Borm